I can only imagine the jaw-dropping experience it must have been for the curator and other staff of the New England museum as they stood, the morning after, March 18, 1990, before the empty frame still hanging on the wall. Rembrandt’s 1663 masterpiece, ‘Christ in the Storm’, had been stolen.

Searching around on the Internet for another of Rembrandt’s works, I came across photographs of the gorgeous piece and the stupendous story of its disappearance.  Rembrandt’s renowned ability to cast light on the subjects of his painting from unapparent sources was evident even in the tiny photos available online. His style produced an eerie animation effect on the roiling waves of the sea, as it spitefully tossed the boat with its thirteen occupants: twelve at their wits end and one, calmly asleep, about to be roused.

The dramatic high-point of the painting for me, if a painting can be said to have one, is the disciple at the prow of the boat, desperately grasping the torn edge of the mainsail. His occupation being to hold it to the mast from which it had been jaggedly torn, separated, along with the rigging which now whipped and lashed wildly above the entire scene in mocking abandon.

To think that an activity that was such a normal part of the everyday life of most of Jesus’ disciples could also just as typically cast them into such an extreme circumstance was a compelling analogy. To these Middle-Eastern fishermen sailing this sea was ordinary life, and the Sea of Galilee was indeed known to go, rather unexpectedly, from glassy serenity to wild bucking tempest. Which is why, had it not been for Jesus’ agenda, they probably would have been safely put in to shore somewhere. How maddening it must have been for them, in light of these facts, to have Jesus calmly snoozing in the bottom of the reeling vessel!

Can you feel their pain? Have you ever been there? I have. Maritime imagery keep speaking, keep calling me out on the water where all my inadequacies become exposed: my lack of tacking maneuvers to sail into head-winds without breaking apart; where anchors seem baseless and rigging ropes whip mockingly useless way over my head and I am left feeling quite like the one disciple trying desperately, by hands and feet, to hold sail and mast together. These also, are the long ordinary times of our lives.

Ordinary time: that second lengthier period between Pentecost and Advent when the glorious truths gleaned and reinforced in the high, holydays of the church’s liturgical calendar, are tried and proven in the normal humdrum, or frantic extremities, of our daily lives. So, it’s normal for children to grow up and move away and for parents to grow old and require care and for our bodies to age and dare us to do today, things so easily accomplished yesterday, without painful consequence. Why then do these ordinary circumstances try us so? Could it be that we were designed for peace? For joy? For rest? Why the unrelenting laws of entropy, the poet’s prediction of mortal man’s expectation of trouble, — ‘as certain as the sparks fly upward’? Murphy’s observation turned law? Sin’s gravity.

But there is a Light shining always, though sometimes from Shrouded Source, that reveals the Truth that rests like ballast at the bottom of the boat of our ordinary times— it’s Emmanuel, for whom we waited; Paschal Lamb, for us crucified; Risen Lord, triumphant over death and Hades; Divine Paraclete, now accessible. Prone in our boat He waits to be invited, waiting to demonstrate that He does care, listening for the fervent or gentle beseeching, for the tug at the hem of His garment or the unabashed seizing and shaking of His shoulder that bears the government of nations and ages. God, in the midst of our ordinary days, invites us to ask, seek and knock — to pray.

Rembrandt chose, wisely perhaps, to freeze frame that moment just before the Lord of Creation commanded the elements of the storm to return to a peaceful calm. Yet how inspiring would it have been to see the whipping rope of that rigging fall gently down to hang limp, reachable and manageable, alongside the now steady mast. How comforting to have viewed the relieved expressions on the faces of the twelve, awestruck, as they observed unruly waves tucking their frothy tails between their aqueous limbs and slinking away to cavernous depths. 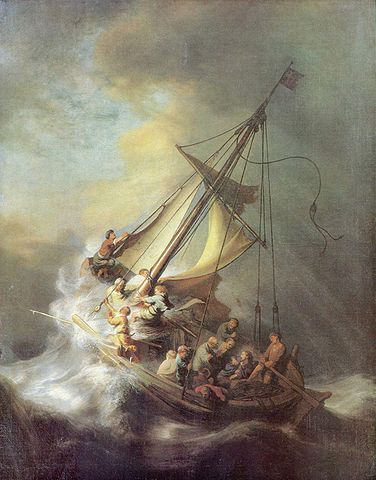 Even so, Lord of the winds and waves, speak to the storms of our ordinary lives: lasso the hounds of war breaking forth from the gates of our nations, threatening to consume our sons & daughters; transform deceived minds that foment chaos in hopes of unveiling a new world order or of revealing a religious messiah whose adherents slaughter the innocent and crucify the faithful. Mend our broken moorings and anchor us again in Truth that does not shape-shift with the times. Heal our storm-tossed bodies, stretched and strained beyond capacity’s design. Help us submit again to Creation’s rhythms and know Your Sabbath rest.

May the thieves of the masterpiece restore it to the viewing world and, more important, may You hear our cry in our ordinary days, as we cast the full weight of our expectation on Your revelation: Christ the King! in the Midst of Our Storms.

Like Loading...
Our morning conversation did not entertain too much small-talk today — grace-filled, honest, tearful, challenging and encouraging all at the same time. My friend, my sister, my mentor, with kind but deft, insistent fingers, handled my heart and teased out questions and answers with skills learned through diligence and study, and gifting , yes, but also through wisdom gleaned on her own pain-filled but God-directed life-journey.
As we closed in prayer, I identified with her mother-heart’s cry for her youngest, who that very moment was in a mental health evaluation facility. All who know her scream a collective “Why!?”. Yet we have learned the grace of the open hand through this faithful, warrior-Mom’s example and, with her, stand on our watch to see what He will do.
Standing with her this morning in prayer, I saw the Lord’s assurance of His Sovereign grace over this situation in the form of His Hand as a massive, wide-spanning wing over that health facility, over that precious righteous seed. Each feather soon became identified as an aspect of the select care He was overseeing for her (nothing random here)— the medical professionals, the medications she would imbibe, the therapists, the treatments— all established, pinioned and aligned to suit a purpose momentarily veiled to our earth-bound eyes.
What assurance! What a place to fix our eyes when we long to rail against the darkness, the clouded, the shadowed, the Hard. Remember, then, my fevered soul, you are no ordinary chick, you are His. There settle down and ride it out; you are under His Wings.
With apologies to William Cowper:
“Ye fearful saints, fresh courage take,”
Lift now your burdened head
See over all and underneath
Eternal Wings outspread-
Resplendent pinions flashing fierce
With span too grand for earthly sight
Are still the tender, broody kind
That succor and give might.
To you my friend; you make me want to be brave too.
DSA

Like Loading...
“Give up the habit of giving up”
…encouraged the man of God. Seemed like a good idea to me, especially since this season seems to be one which has necessitated the relinquishing of so much already.
Give up the habit of giving up on the idea of a forever safe hobbit hole in the Shire, or anywhere in Middle-Earth anymore? He, upon whose shoulders all government rests, is our shield and strong tower! – the ultimate Hobbitt Hole. Abide under the Shadow of His Wings!
Give up on the habit of giving up the illusion of control – unless you understand your vantage point and privileged position in the Grand-scheme: Consider the mouse, invited to ride high on the back of the massive elephant as they cross a bridge, who quips “We sure shook that bridge, didn’t we!” A picture of the ‘control’ we wield in prayer. Pray!
Perhaps the way Zechariah felt when he looked up and saw an angel in the inner sanctum of the temple telling him that his barren wife would conceive… give up the habit of giving up;
Or the way Naomi felt as she looked into the eyes of her son’s widow Ruth, whom she had earlier advised to return to her family of origin and their false gods, but who had now placed, on her lap, the man-child Obed , who would be the grand-father of King David, of the line of Messiah. She gave up the habit of giving up! In fact she dandled fulfillment on her knees with greater joy than when their new wine abounds – the tune of an eternally joyful lullaby. Persevere in hope!
Lent: A time to persevere in hope.
Lent: Because no one wakes up on resurrection Sunday with full appreciation of the Atonement, who has not set his soul to ponder These Things, to meditate, to worship, to lay hold upon the exceedingly Good Thing – The Gospel.
Lent: An old wine skin? Not if it means giving up the  habit of giving up… and laying hold; persevering until The Dawn.