A few years ago, having given in to our nature-loving daughter’s pleas, we once more purchased a natural evergreen for our Christmas tree. Truth is I could hardly wait for the twelve days of Christmas to pass to move the shedding alpine from the living room. Then, in my pragmatic, Jamaican, ‘Tu’n you’ han’ mek fashi’n’ mode (patois for re-purpose and recycle), I thought cutting up and then burning the tree in the fireplace was a perfectly frugal and efficient idea.

Mercifully, the outdoorsman and the Eagle Scout in the house were quick to put the quabash on that evidently hazardous suggestion. To which I am sure our first-born safety guru gave hearty agreement. They explained that the pine-oil in the needles and branches makes them super flammable & fast burning and that the creatine produced would leave a sticky deposit on the walls of the chimney — a nightmare to clean off etc. So, limbing it and saving the trunk for our Easter Cross, we hauled the bramble off into the woods where our cul-de-sac dead-ended.

This event came to mind recently for two reasons. The first was the ease with which we now put away our Christmas tree – because it is artificial! – a few quick folds (after removing ornaments of course!) The other was the Bible read-thru journey on which our church has embarked; reflecting in Exodus 3, I have become freshly enamored by Moses’ encounter with God in a bush that burned but that was not consumed. Trying to picture the scene, I have wondered, was it flame-colored like the animated movies and book illustrations portray? Or was it ever…green, though burning with God’s glory, flaming fiery golden, all around it?

The speaker I heard address the story recently on the radio was not my favorite, as far as style of delivery, but I listened and was blessed to share in his revelation that God did not speak out of that burning bush that was ever…green until Moses turned aside to see.

Bushes catching fire in the dry heat of the Judean wilderness was not an uncommon occurrence, he rightly explained. But mercifully, in God’s eternally good providence, Moses was paying enough attention to notice that this one was not being consumed. How long did Moses watch it from the corner of his eyes, I wonder? All day? Half-a-day? How long did it take him to decide that the trouble of securing the sheep prematurely or else of risking leaving them untended for a while was worth taking a closer look at that bush? Again I am filled with gratitude for the persistent, pursuing love of the Divine Trinity who hovered in radiant glory upon that bush until Moses, like a fly to a flame, was drawn irresistibly. 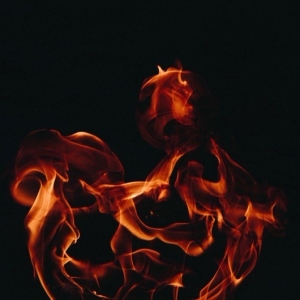 Except, this was no fatal attraction that ran the risk of crisping a critter, setting a forest aflame or of burning a house to the ground, like my burning evergreen bid threatened to do a few years ago. Rather, it was God’s redeeming love and His holy restraint revealed simultaneously. He was following up on promises made Millennia and centuries before – from Adam and Eve to Abraham, Isaac, Jacob and now his progeny – that would have repercussions for the redemption of all who will believe in the Messiah issuing from this people. That Burning Ever…Green was not about saving energy, but saving Mankind from the consuming fire of God’s righteous holiness; not to destroy but to restore fellowship with Himself and secure a return to the sweet communion of Eden. Praise the Lord!

Despite the trouble of using a live Christmas evergreen, from purchase to disposal, I must admit that like fresh flowers, its fragrance and vibrance add an amazing element of life to Christmas decor. My reflecting on it in the light of Scripture, proved the radio preacher right – turning aside from the daily grind, in faith-filled anticipation of encountering the God who is there, ever seeking our errant hearts, prepares us to experience a foretaste of that Day, while yet here on earth. Elizabeth Browning and Ann Ortlund lyricized about this (the latter inspired by the former):

The earth is cramm’d with heaven!

And Christian look around!

For ev’ry bush with Fire is flaming!

And ev’ry place you walk is Holy Ground”

Praying a season of constant turning aside to see the Lord, during this first round of Ordinary Time.