As the Advent season approached this year, I found myself wondering, for the first time, what preparations on the heaven side of things may have looked like that first Advent. My fertile imagination pictured angel-feathers flying everywhere 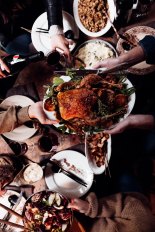 God clearly loves feasts and the celebrations surrounding them and has built similar delight into the hearts of us humans. No other creature has behavior that compares to the uniquely human practice of festive celebration. God’s instructions to Moses for His ancient people, Israel, organized their year around major feasts. They also had smaller ones regularly attending other aspects of their daily life, such as the Sabbath. So, it’s not surprising that Jesus often taught of the advancing entry of the Kingdom of God in terms of preparation for a great feast.

As the Advent season approached this year, I found myself wondering, for the first time, what preparations on the heaven side of things may have looked like that first Advent. My fertile imagination pictured angel-feathers flying everywhere, as the heavenly messengers delivered missives, via dreams and annunciations to the relevant characters of the Christmas story, seeing to the fulfillment of prophecies and keeping demon spirits at bay. Was there a send-off feast? I know I run the risk of venturing into anthropomorphism—bringing God down to human form—yet the circumstance invites the imagination to take wing.  It tempts us to wonder what the feast in heaven may have looked like, if there was one? I believe Jesus gave us a hint, in the parable, from today’s Scripture.

Here, in Matthew 22:1-14, Jesus draws on the practices of these ancient cultures familiar to His hearers, but with a twist that would delight the ‘poor in spirit’ of His audience and anger the proud and self-righteous of the religious elite. It would have been clear to the crowd who the bad actors in the parable represented and who the humble folk, dragged in from the highways and byways, needing to be issued appropriate clothing.

But lest we mistakenly assume that Jesus was playing into ‘classism’— elevating the ‘poor in pocket’ over the wealthy, His parable makes clear that no one in attendance at the feast of His coming Kingdom will do so on his or her own merit. We must all come as the ‘poor in spirit’—the same fury which the King displayed against the initial guests, who esteemed their own business above the King’s, and killed His messengers, is also dished out to the latter guests of humble means, who declined the covering provided in Grace. The response of the King, representative of the Heavenly Father, is completely understandable when you consider that Jesus’ parable is of the Marriage Supper of the Lamb, at His Second Advent, and the covering graciously provided, nothing less than the priceless blood of the Son of God Himself!

“Thank You, gracious King and Lord, for Your amazing invitation to feast in Your glorious Kingdom. As we approach the celebration of Your incarnation, may we all make ourselves ready, robed in Your righteousness alone.”