My neighbor M felt she was single-handedly responsible for it. Her bird feeders were sustaining the population of birds in our subdivision she intimated one day, as we chatted across the fence.  At the time I had felt no need to challenge her claim.  In later years, the County had declared the undeveloped land, where our neighborhood dead-ended and its creek, a conservation area: sanctuary to the amazingly varied bird population and our family was thrilled.

We felt we knew, more than anyone else, the treasure that was hidden in our little wilderness park, as we had completed a unit study on birds of the Eastern USA states one homeschool year: binoculars, field guide, and even various home-made bird feeders, to attract different species, had made for a special season of learning. When our year wrapped up we felt well-informed but had tired of replacing our bird-feeders each time they had been discovered and destroyed at night by other wildlife. M’s store-bought feeders were more durable and long after our students’ discretionary time got eaten up by other studies, sports, part-time jobs and social distractions away from home, she had fed the birds.

As the years rolled by, we observed and noted patterns of migration, flocking and feeding habits in our modest ornithological population—Canadian geese flew by, honking way overhead, thankfully; sadly, the blue-birds which had happily existed on the fringe of the woods disappeared when basketball players claimed the cul-de-sac for a few years; the pair of mourning doves that frequented the fence between us and M probably completed their life-cycle before I realized they were gone, along with the raucous bully blue-jays; red-breasted robins, cardinals, finches, nuthatches, and ravens remained ubiquitous, and woodpeckers, owls, and occasional hawks made their presence known.

However, one constant was the flocks of small birds that would descend in a panic on our yards as inclement weather approached with the changing seasons. In a nervous dither they would swoop down, peck apparently haphazardly, at whatever was in our grass then flitter away, just as desperately, at some signal that was indiscernible to human eyes. I felt for the tiny things, eventually wondering with my raw empty-nester nerves if they had had enough to eat for their journey.

It’s no wonder that I jumped at the offer of the sturdy bird-feeder, offered by my Vietnamese neighbor Mr. M, as he packed up his yard, preparing to move to another state. It took my husband and I quite a while but we eventually figured out a way and a spot to maximize its placement. We wished to out-wit the greedy squirrels, yet keep the feeder close enough for easy refilling, and to expand my mother’s limited entertainment options with bird-watching thru the winter months. 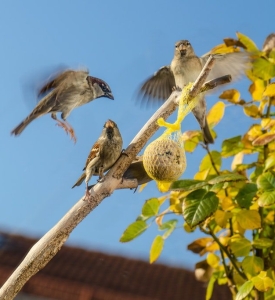 At first, it was a veritable flutter-fest! The new source of food was apparently well-timed, just before an unseasonably early snow-storm blew in, and M had apparently not been refilling her feeders, having been often away that Summer.  It seemed the entire population of cardinals, dark-eyed juncos, woodpeckers, sparrows, flickers and wrens had descended, but eventually they evened out, establishing their pecking order in relatively good-natured fashion.  It’s amazing how well everyone behaves when it becomes clear that there is enough to go around.  Nonetheless, the cardinals and smaller birds resorted to a snatch and dash technique or waited till the bigger ones had had their fill, and always some lone feeder would show up long after the party and still dine satisfactorily in peace.

Each time I glanced at the birds feeding, there was such a sense of satisfaction as the Winter progressed.  I felt strong identification with Adam in the Garden of Eden, caring for Creation, such a sense of responsibility!  The environmentalists would be so proud of me, I imagined perhaps erroneously, for I remembered signs at campsites: ‘Do not feed the wildlife!’  But I had the goods and the birds knew where I lived and all was well… until about the fourth refill.  I had begun to notice a drop in visitors to the feeder, though from a distance I could still see grain in the tray.  I had delegated the two previous refills and subsequent snow and rain must have flooded one or both of those fillings for, when I checked, the grain was moldy and stuck to the tray.  I unhooked the feeder and brought it in for what I had expected to be a quick refill.  Not so!

Much back-breaking scraping, scooping, and gathering of scattered moldy millet seeds, from all over the washroom floor later, left me with less than charitable thoughts about birds and stewardship of Creation.  Disgruntled, I remembered how much I disliked the doleful tune of the song ‘Feed the birds’ in the classic movie, ‘Mary Poppins’ (or was that ‘Chitty-Chitty Bang Bang’?) which now played incessantly in my head.  I decided to toss the moldy seeds out in the backyard grass, begrudgingly figuring that even if they found it, they had probably eaten worst fare before I came along to rescue them.

My hands busy with the mindless task, my thoughts wandered and landed in a strange place and as I repented in horror, I understood Scriptures injunction to take our thoughts captive.  For I had found myself drawing a parallel between my neighborhood birds’ scrounging in the grass for the moldy seeds and the people of poverty-stricken nations combing through and making a living on the refuse and garbage of the affluent.   We had done more charitable giving this year than ever yet I still felt a sense of guilt and frustration at the reality of abject poverty both near and far away.  Mission feeding organizations, Christmas shoebox gift programs, gifting of livestock, digging of wells, medicine and securing the lives of unborn babies all still felt like a drop in the bottomless bucket of human suffering.  My hands fell limp from its seemingly futile task and I prayed for the storm-driven, suffering masses of our broken world.

As I walked back to the deck, feeder in hand, the reality hit me, ‘Yes, God probably used me this Winter to feed His sparrows but the many years and seasons, when neither M, my homeschool project requirements nor I had seen to it, they had been fed’.

“They neither reap, sow nor store away in barns,” says Scripture, “yet your Heavenly Father feeds them”.

Elsewhere it says that not one of the smallest, most common of birds, the sparrow, falls from the sky without His awareness.

Instructed, I put a moderate helping of seeds into the feeder, rather than my previous, over-zealous, wasteful dump.  As I scanned M’s fence, before turning in, I noticed with pleasant surprise that a pair of mourning doves had returned.  I had not answered the tough questions of Third-World hunger but I was closer, knowing at least for sure, Who it is, really, that feeds the birds.