I promised in early August to do a weekly post chronicling highlights of my trip home to Jamaica, taken at the end of July 2018, BUT I forgot to add ‘Deo Volente’ (God Willing)! Well, life happened, as they say, complicated by schedule-altering transitions. Nonetheless, here at last: “Going Back Home” (in four parts); ‘Deo Volente’

I did it. After more than 18 years since my last visit, I finally made a trip back to my island home, Jamaica. There was something surreal about those first few moments, once we passed through customs and found ourselves standing on the curb outside the Norman Manley International Airport. To say I had to savour the moment sounds cliché, but I did. It was akin to ‘feeling out’ a familiar friend too long neglected. I sought permission to stand on her soil again. 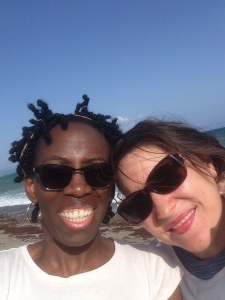 I smiled internally at my well-traveled American friend who, with phone in hand, was in business mode, trying to figure out why our ride was not there yet, while I was wrestling to accommodate a visceral reaction to the familiar-made-strange-re-visited. I needed to let skin that had adapted to temperate climate re-adjust to the warm yet refreshing Caribbean breezes wrapping themselves around me like pet cats glad to have me home.

My eyes searched for the common ‘exotic’ sights — the post-card shot of the pile of coconuts waiting to be chopped and served, the sidewalk vendors, the uniformed school-children, the erect, ambitious, unstoppable Jamaicans with whom I had proudly sojourned for my first 27 years of life. But I was in too much of a rush. For now I would have to be satisfied with the jostling and questioning of the enterprising taxi drivers, eager to go but reluctant to leave the airport stand with even one seat available in their vehicles, and take my place in the waiting queue of the wide assortment of Jamaican travelers, weary and wary; practicing risk and trust: ever-present travel companions in ‘Jamaica land we love’.

The air was familiar but the atmosphere had shifted. The changes threatened and jerked me around–the commanding billboard beckoning to buy the necessary Digicel chip and plan to adapt your cell phone for digital communication on the island; the self-serve kiosks inside the customs areas themselves had been a surprising sight: how like America yet different; randomly selected from the entering crowd we were allowed to even by-pass the anticipated customs grill. Later I observed that the airport road had seen some development—unnaturally large stones lined a significant portion of one side of the narrow peninsula and a pristinely paved and be-railed walkway hugged sections of the inner shore of the harbour on the other. ‘The Chinese are here and are busy developing’, I would later hear repeatedly muttered in varied tones. Is this still “Jamaica? My Jamaica? The Land of my birth?” The refrain of the winning festival song from decades backfilled my mind.

Daddy had arrived soon enough, in typical Daddy-style–ishly late. Some things never change: brows knit, lips tight, wearing that demeanor that always says “Yes, I knew that” or “I planned it that way”, or else the suspicious questioning frown that asks, “What is going wrong here?” His vehicle, like himself, evidenced the wear, tear, and repair wrought by the challenges of life in a developing country, but both were doggedly still trucking along, pride in place. Kisses, intros, hugs, and luggage handled we entered the city, nose first, for it was night:

As we drove along, the smell of fresh sea-breeze from Kingston Harbor was briefly interrupted by the familiar pungency of fermentation emanating from the Jamaica Flour Mills’ silos and, as we slowed at traffic stops, the odors of the city’s nightlife wafted in — a mixture of smoke from roadside grilling and marijuana braided its way in through one window and out the next. Providentially or not Jamaican hospitality and Daddy-memory were soon activated and without my even asking, (as I am sure he planned it) we headed from downtown, by a road whose name I should have known, to Kentucky Fried Chicken in New Kingston.

Inevitable questions arose on the way, as a few familiar sites peered out of the night-dark and Daddy kicked into tour-guide mode, helping me brush off my dusty memory, matching news items caught abroad to signage on buildings and institutions. But I knew I was too tired to really process anything deeply and felt all on a sudden strangely powerless. Lyrics from a decades-old Barbara Gloudon Pantomime slipped through the cracks:

“All on a sudden everyt’ing change. All on a sudden everyt’ing ‘trange…”. Except it had not happened ‘all on a sudden’. I had lived abroad as many years as I had lived in the land of my birth and was now, among other things, a United States citizen and unsure how all of that would play out…and that was only one aspect. I had changed in several aspects and clearly, so had Jamaica. The personal, interpersonal, national and international baggage threatened to overwhelm me. I leaned back and just decided to let ‘coming home’ happen to me. Maybe the psychological customs officer would give me a pass.