Resolved, Cortez ordering the burning of the ships that had just brought them to the New World;  Resolved, Peter stepping from the boat at Jesus’ invitation to join Him…walking on water; Resolved, the writer, picking up pen or keyboard and pushing past ‘writer’s block’ on toward the ‘battle of the middle’ — that point at which you realize you’ve invested too much to turn back now, but are fully aware that  in this moment you have no idea how you will finish what you have started.
Coming to America, has often meant being perched, on the edge of a new frontier that necessitates resolve to keep moving forward—the Dwell Writers’ Retreat presented several such steps for me. The plunking down of hard cash for registration and lodging reservation at the top of the year was the first. Another presented itself as our small rental car pulled into the parking spot at the Centrum, Grunewald’s main hub where ‘arrive and check-in’ were to occur.
As Claude & I alighted, I nervously averted my eyes from the small group of women sitting (how poetic!) under an  apple tree, shouldered my purse, and with resolve, did the only thing I could do at that point…, took the next step.
The moment after was God’s gift of grace, for no sooner had my eyes picked out the one person who resembled the online picture of my ‘blogger’ friend, Kimberlee, than she flew out of her chair and with the glee that only old girl-friends know, greeted me with a sweet welcome embrace. I realized then that it is possible to get to know someone via the Internet, really!
I first encountered Kimberlee’s earnestness and devout pursuit of the Divine 4 years ago through her seminal work The Circle of Seasons, about the Church’s liturgical year. Her warm greeting was as genuine in person as she was online. Later in the retreat, as she led us through the lectio divina  (a reading of and meditating in the Scriptures that provides opportunity to open up to the Holy Spirit’s transforming work in our hearts) on Psa. 37, through Communion and  a writing session on the Psalms, my sight was lifted above the earth-bound to things heavenly. But that first morning, as we returned arm in arm to the circle of chairs under the apple tree, amidst introductions and exchange of pleasantries, I realized I was among an entire group of gracious outpouring.
And outpouring it was, for perhaps the next best thing I found out about the group was that we were the type of writers who loved to ‘tell it’ with our mouths as well as our pens.  In less than a half hour, we had plunged in and exchanged much about our quite varied stories. 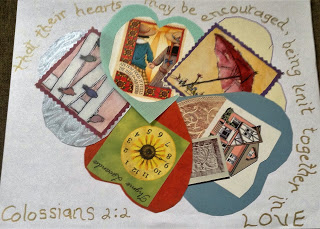 Amy, of The Messy Middle blog fame, was probably my biggest surprise — in all the email & registration exchanges it never occurred to me that she was that Amy: a young veteran of the mission field in China. Her personality was as vibrant as her soul was resourceful— a maestra of the ‘interwebs’ and social network connectivity, who ably tells her own story in her first book, Looming Transitions.
Then there was Jody, who like a broody hen had worked with Kimberlee to gather us to ‘Dwell’. A conductor, in more than one sense of the word, she somewhat casually steered us through the weekend’s schedule, from quirky welcome packets, to co-leading worship with spunky Laura, and facilitating a loaded session titled ‘Unpacking Psalm 37’.
Laura’s acoustic guitar chords and the few well-chosen songs were perfect and served me well, both during and after the retreat, as I pressed in to discern God’s purpose in it all. The scope was intimate but the expectation level of this gathering was audacious. Audacious because we were taking our call seriously, some further along than others, but all, investing time and resources — taking the next step, resolved to dwell.
Twenty-seven years or so before, resolve for me, was saying ‘yes’ to marriage and to migration away from all my familiar. To many back home, no doubt, it looked all rosy and fairy-tale-like, which it was, until the effect of sudden change set in. The new daily-ness tussled for dominance in my change-resistant soul and the stasis of mild depression set in.
Wish I could say that I had then reached out and embraced the steadying truths of James 1: 5-6,
“If any of you lacks wisdom, let him ask of God, who gives to all liberally without reproach, and it will be given to him.  But let him ask in faith with no doubting, for he who doubts is like a wave of the sea driven and tossed about by the wind.”
My first few months as young wife & immigrant found me “driven and tossed about” emotionally.  We were in a misty Midwest Fall & Winter, a fact which, no doubt, both caused as well as mirrored my dark mood.  Christian radio providentially offered the sage but austere advice of the timeless Elizabeth Elliott, “Just do the next thing”, resolve.
Though I hated to admit it then, it was a a good perspective setter, but I also needed the equally providential input offered by my Jamaican pastor’s wife, Dr. Patricia Morgan who, by telephone, outlined for me the profound transitions (at least seven!) that I was having to make in my new life — unavoidable fallout of the resolve of marriage and migration. She wisely  advised, be gentle with  yourself, ( spend the day in bed if you need to, read, take walks)  but when Claude is almost home, get yourself together and fix him a nice meal; welcome him home…do the next thing.
The second in my Kansas Sunrise Triad sought to capture that time —
KANSAS SUNRISE (II)
The Next Step
Kansas sunrise, misty grey
Night that loathes to give way to day
Earthbound water and heavenly fire
Tussling to rule, cloud the new day’s desire
To break forth upon the night of man
So crawling we go to catch-as-catch-can
Striving we go to discern the intangible
Loathing to take the one step that is possible
Doubting that in ‘the next step’ we find
The way that is open to sighted or blind
Focusing on the grey swirl that is seen
We reach forth our arms and embrace the screen
But earth takes its axis so soon night and day
Make clear to the faithful plodder the way
With light from above he’ll steward the earth
For the Creator’s nature is shouting forth
The Truth that draws the final line
That determines our rise or vain decline
So Kansas sunrise, your cover is blown
Your bushel of doubt is overthrown
‘The next step’ brings the piercing ray
That scatters your shades and brings forth the day
And now through the dark like an arrow true
Comes word by the song-bird the day’s broken
through!
– Denise Stair Armstrong
(c) 1993
As with my marriage, I had embarked on a ‘no turning back’ kind of venture, with the Dwell Retreat.

My feet were dangling over the edge as I peered furtively, through my iPad screen at stormy issues of publication, Facebook & blogging.  My inexperience with and fears of the Internet were as giant waves threatening my demise before I even launched.  But I need not have feared, for the One who moves in a mysterious way, already had His footstep planted on this storm in my teacup. And His smiling face bid me come walk with Him…on oceans.

I did have one poem published and had written a play back home that I understood they still aired at times during Jamaica’s Independence season… But the journey to Leavenworth, Washington was for treasures that  I believed  still awaited, patiently, deep in me; words “…tried like silver in the furnace of the earth, purified seven times” (Ps. 12:6). So, with resolve, my eyes fixed on Him who gives wisdom liberally, without reproach, I stepped out and let that ship burn.

e teacher. She gratefully enjoys a thirty-years-strong marriage, which has joyfully produced three offspring. Jamaican by birth, Denise's work reflects her family’s cross-cultural journey. She is a blogger in poetry, short-form essays, ethnic sketches and musicals. Her work has also appeared in The Caribbean Writer--a literary publication of the University of the Virgin Islands, on SA Radio Cape Pulpit’s – ‘Voices of Change’, as well as on Jamaican television. She considers herself privileged to be a contributor to one of today’s most exciting online communities of Christian artists—The Cultivating Project. At present, she resides in Europe. View all posts by Denise S. Armstrong